Games were played on to be played on Thursday 11th and Thursday 18th April 2019 commencing at 8.00am
After some very close matches Alan and Leon were close winners but only by 2 points on count back after both teams winning all 4 games. Well played Kim and Gerry - so close! 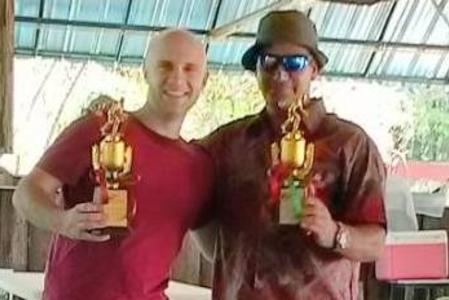 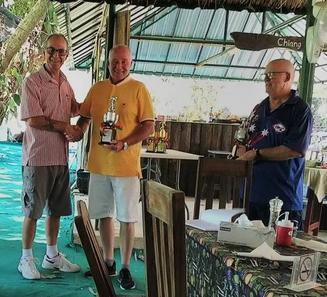 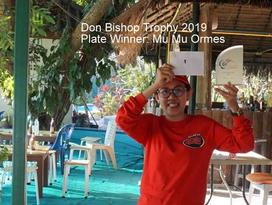 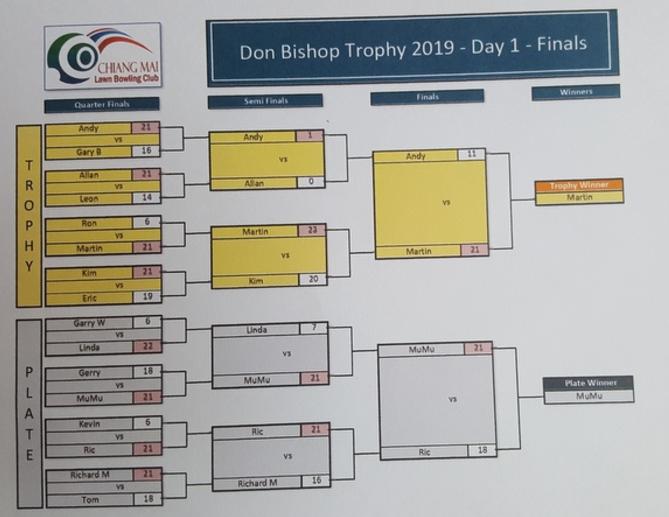 Please find attached Conditions of Play for the Don Bishop Trophy which begins with the first group of 12 players on Thursday 24th January at 8.30am.
I hope the conditions are self explanatory but if you have any questions please let me know and if you are unable to open the attached document also let me know and I will re-send it embedded in the body of an email.
I am sure that Don will also post the document on the website.
Good luck to all participants and I look forward to seeing the first group on Thursday with of course, any spectators who are always welcome to see what's going on.
Best regards
Eric

It was a strong field of bowlers and although a small number of players were heavily fancied, this was a knockout competition where on their day, everyone was capable of winning the event.

Thanks to Don, the green was in pristine condition and as long as the rain held off we were in for a good day’s bowling.

The random draw was made and the first two names out of the hat were two of the pre-tournament favourites, Kim and Joe to face each other in the first round, resulting in Kim knocking out his fellow Aussie by reaching the target with 50 points to spare.

Andy managed to beat a dogged Kevin by 104 to 65 and a similar score saw Sam eliminate Richard who was playing his first completion with a different set of bowls.

Eric managed to get over the line against a steady and determined Dutchie by 103 to 87.

We then saw two very close and exciting games as Martin hung on to beat Tom by 101 to 99 and in an equally close game Mai defeated Leon by the same score.

Ron edged out a spirited Mumu by 104 to 76 and Chris played some great bowls in winning his game against Howard by 108 to 62.

Eric managed to beat Sam 101 to 89 in a tense but scrappy affair and in a close and tight game where both players displayed a wide range of shots, Mai just got the better of Martin by 104 to 96.

In yet another exciting game, the match on Rink 4 between Andy and Kim also went to the wire with Andy’s last bowl securing the win over one of the pre-tournament favourites by 102 to 98.

After a lunch break where pizza was organised by Richard, our temporary ‘Catering Manager’, we commenced the semi-final games where Andy was just too consistent for Eric and won by 104 to 66 while in the other match, Mai won a closer game against Ron by 105 to 85.

It was pleasing to see that so many players had decided to stay and watch the final and they were rewarded by a really great game between Andy and Mai.

The early part was fairly even but then Mai put some pressure on her opponent by building up a 16 point lead. However, a couple of 9 point ends pegged back the lead to give the spectators an exciting finish.

At 99 points to 91 in favour of Mai, it became a real test of Andy’s character and determination needing 10 to win or 9 to take the game to a sudden death.

Putting one of his bowls in the ditch made his task even more difficult, but Mai was not able to take advantage and with his remaining three bowls all close to the jack, Andy made the score 100 each.

An early toucher gave Mai the advantage but Andy managed to nestle a bowl between her bowl and the jack for shot, although Mai had two seconds. Andy’s third bowl was a beauty and took shot and when Mai missed by a fraction with her last bowl the final game of high quality bowling was Andy’s by 107 to 103.

My thanks once again go to everyone involved, particularly the players and the spirit in which all games were played, which helped to make this yet another exciting and enjoyable competition and we all look forward to the next event. 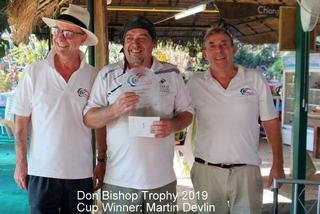 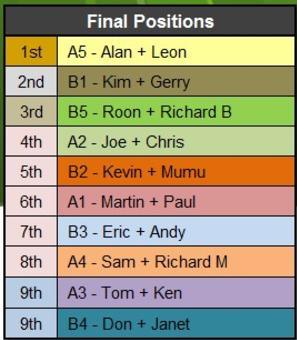 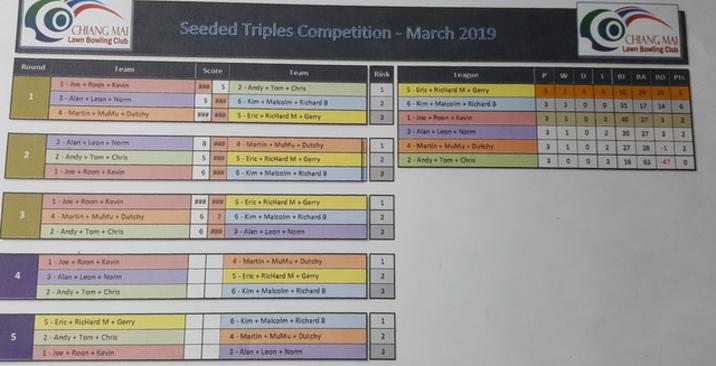 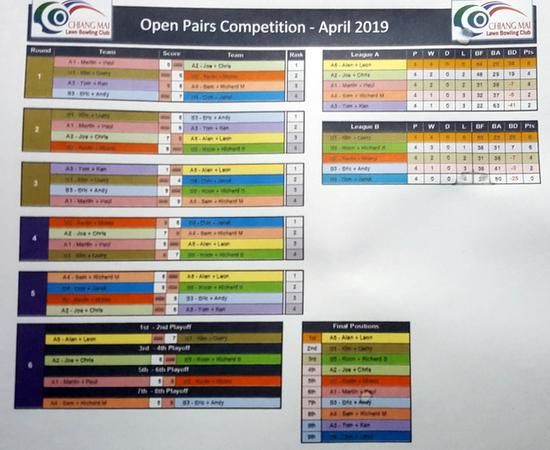 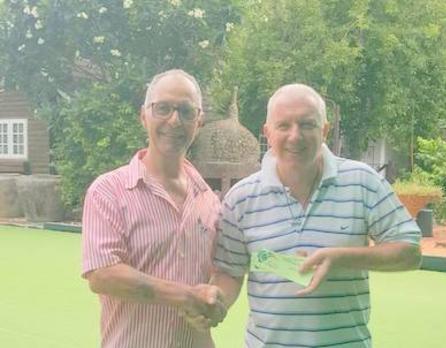 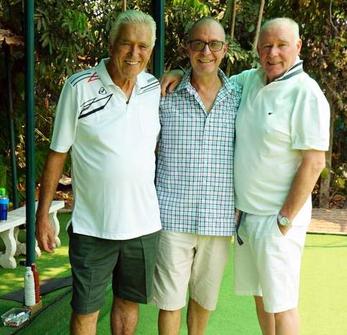 Thanks and well done to everyone who played in the Seeded Triples. Another successful event and although everyone played well, there can only be one winner.

​Nice to see Rchard Massey in the winners circle after playing good bowls for quite a while.

Runners up: Kim, Malcolm & Richard B