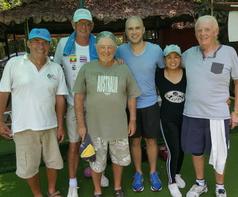 A great turnout with 16 bowlers for twilight bowls but very hot and humid. Nice to have Rung (Sam's wife) bowling again. Unfortunately the ladies (Maureen, Roon and Rung) lost to Sam, Tom and Marc 20 to 10.

In the other triples Richard M, Arun and Chris were too good for Ron, Jon and Don winning 14-7. 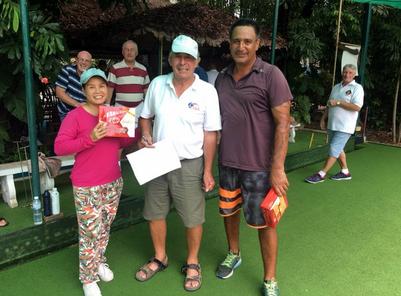 Joe and Andy gave Eric and Malcolm a bit of a thrashing 35 to 13 over 35 ends. Welcome back Joe.

In the first triples Tom, Jon and Chris lost the first set 20 to 9 to Alan, Andre and Garry. A  great comeback in the 2nd set to reduce the deficit to 12 to 11.

​​In the 2nd triples Don, Paul and Ron narrowly beat Roon, Richard and Ric by 24 to 23. Photo showing Ron showing off with some very tight bowling. Well done Ron.

Tom and John caused a bit of an upset today  narrowly beating Roon and Richard B by 20 to 18. Don, Garry and Ric too good for Chris, Andre and Malcolm winning in 2 sets to nil. The 2nd set was a lot closer at 11-10.

Marc wins the last end but Arun star of the show, beating John and Chris 16-10.

In the triples Alan, Ron and Maureen beat Don, Peter and Mai by 14-10.

The ANZACs Don, Garry and Ric were well beaten by  Roon, Richard and Alan  by 2 sets to nil.

Eric and Richard M beat Tom and Andy in a very tight game and in the other pairs Malcolm and Leon had a fine victory over Marc and John. 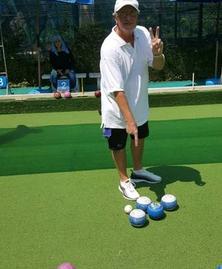 A fine recovery in the pairs with Sam & Richard 9-1 down and finally winning by 20-17 against Maureen and Paul. In the triples Joe, Chris and Jon beat Arun, Don and Marc 20 to 17.

14 bowlers today on a cool and cloudy morning and the green in great condition after overnight rain.

In the first pairs Malcolm & Leon had a good fight with Roon & Richard  winning 24 to 20.

A typical wet season day with overnight rain and high clouds providing great conditions for bowls. 12 bowlers so ideal for a round robin pairs competition. Ron did a great job organising the pairings. The 6 teams played each other in 5 matches of 5 ends.  Roon and Leon won the chocolates from Andy and Jpn. The crackers went to Paul and Richard in 6th place. With only 5 ends there was quite a lot of pressure as each bowl had to count. A fun day enjoyed by all.

Some big scores today with new bowler Duchie from outback Australia  joining us for the first time. Big welcome Duchie.

In the triples Dutchie, Joe and Maureen outplayed Arun, don and Martin winning by 27-11. In thec pairs Roon and Sam beat Tom and Richard B 24 to 11. In the other pairs Paul and ron proved too strong for John and Chris winning 20 to 12. 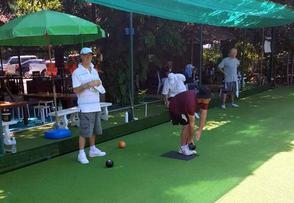 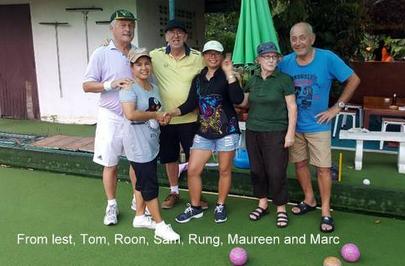 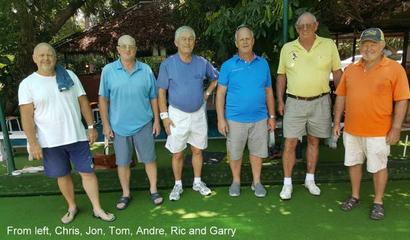 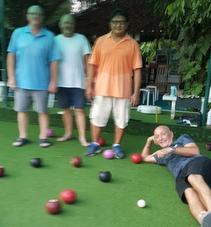 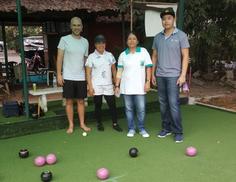 At Thursday's twilight roll up,

Alan and Peter narrowly beat Roon and Mai 18 to 12.

Sam and Arun surprised Tom and Chris winning by 31 to 9. The lesson from Alan has obviously helped Arun - well done.