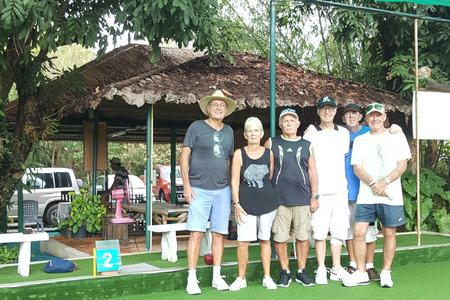 Welcome back to Hayden returning on a leave break from darkest Africa. He was immediately in winning form helping Gary and Norman to a narrow 18 to 17 win over Malcolm, Howard and Arun.

PLEASE NOTE - Roll up on Tuesdays and Thursdays has priority over Singles League games.

A full field of 16 for our Melbourne Cup fun day. The Aussies were unbeatable, winning 7 of the 8 pairs matches. Particularly deadly were Leon (honorary Aussie) and Maureen and also Mai and Joe and Linda.

​We saw the Cup being run and no problems with the reception this year. A guest, John from Berkshire won the sweepstakes with the winning horse being Rekindling.

Welcome back to Richard and Roon after their holiday in England. Today we had one league match with Leon  taking out Maureen  by 105 to 96.

In the Triples, Roon, Richard and Richard M beat Ted, Rick and Arun my 10 to 8.

In the first round of the Pairs, Eric and Kenny beat Joe and Brian by 11 to 9. In another close match Malcolm and Tom beat Sam and Garry 10 to 9.

In the second round, Joe and Brian beat Sam and Garry 14 to 4 and Eric and Kenny beat Malcolm and Tom 16 to 5.

Twelve bowlers today including a flying visit from Terry and Oam Tink. They will be living in Papaya  for the next 6 months.

Terry and Oam narrowly beat Richard B and Roon 20 to 18.

Howard and Arun lost to Leon and Tom by 17 to 28 after giving away 7 points on the last end.

Ric combined well with Eric and played some great bowls to beat Sam the champ and Malcolm by 21 to 15.

Just 11 today because the multi-tasking golfer/bowlers were playing golf in the Chiang Mai Cup between Sanuk-Sabai and Chiang Mai Social.  Congratulations to CMSG for lifting the trophy.

Big welcome to Chris, a new bowler playing for the first time today. Also, big welcome back to Kevin after his trip back home to Aussie. Great that his mum Lola will also be with us for a month. She didn't play today but word has it that she is a pretty bloody good bowler !!

In the Roll-up Joe, Tom and Kevin narrowly beat Malcolm, Sam and Arun by 18 to 3. In the pairs Don and Ted beat Rung and Mumu 12 to 8. A rare win over the powerful ladies.

Sixteen bowlers on a muggy morning including Paul, Malcolm, Sam, Marc and Richard returning from playing in the Triples Competition at Retreat Pattaya.  Although not winners this time it will not be long before they are collecting the big cash.

In the triples today, Marc, Leon and Garry thrashed Howard, Tom and Don by 29 to 15 and Malcolm, Ric and Richard B. beat Eric, Brian and Roon by 22 to 15.

In the pairs Richard M. and  Norm beat Paul and Sam by 25 to 20 is a tightly fought match. Plans for the next competition were announced and please refer to competitions page for information.

Just 12 today but some spirited competition.

In the winners playoff Tom, Ric and Joe beat Eric, Leon and Don by 9 to 4. In the losers playoff Malcolm, Mumu and Ted beat Sam, Howard and Arun by 12 to 6. 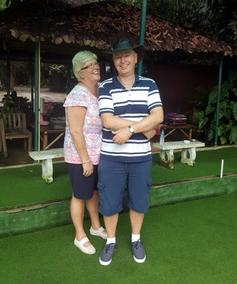 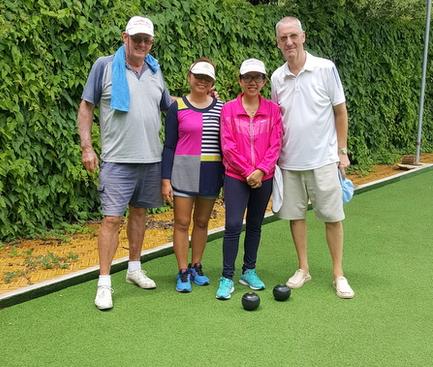 A great  turnout of 18 bowlers today and despite early heavy rain we managed to play 3 matches of Triples including the clash between the Aussies from Tweed Heads (Gary and Francis plus Howard) and the local champs (Sam, Eric and Paul H replacing Paul this time).

Good to have Kevin and Mu mu back from their Songkran break and Mu mu was in fine form assisting the ladies (plus Richard B to beat a strong Aussie team of Ric, Gary and Brian 21 to 16.

In the other match newcomer Joe plus Tom and Leon were too strong for Kevin, Ted and Ken winning 21-11. Joe is a very accomplished bowler and we hope he will be a permanent addition to our ranks. 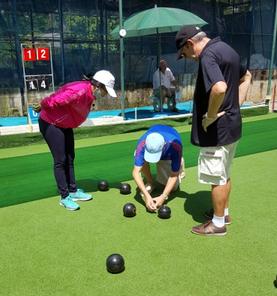 A good turnout of 14 bowlers today on a cool cloudy day. In the Triples Joe, Malcolm and Eric outgunned Paul H, Roon and Richard B by 21 to 13 points. Two pairs games were played with Ted and Ken beating tom and Brian 28 to 9, and Sam and Ric beating Gary and Howard 26 to 16.

Farewell to Richard and Roon who are going to UK for about a month. We will miss you both and look forward to your return. 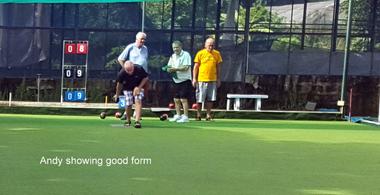 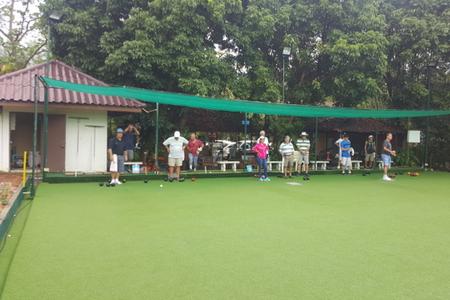 Sixteen bowlers on a clear sunny morning and a big welcome back to Ken and Janet. We really missed you and good to see you in good form.  Another new bowler, Ric (see photo) showed some good skills and will be a force to reckon with in the future.

In the triples today, Ric C, Garry and Leon beat Richard B, Roon and Brian by 19 to 16 in a closely fought match.

Eric, Marc and Andy beat Paul, Richard M and Norm by 19 to 29 thanks to some high scoring ends near the end of the match.

In the pairs Ric and Janet went down to Tom and Ken by 34 to 4. Ken has obviously been doing some sneaky practice while in England !

In the triples today, Richard B, Roon and Linda beat Marc, Maureen and Janet by 24 to 12 with some amazingly accurate bowling by Maureen. Has she got a magnet on her bowls and the jack??

In the pairs Eric and Ric beat Leon and Garry by 32 to 16. Eric's new flashing bowls obviously had the Kiwis/Aussies dazzled !

In the other pairs, Don and Allan just held out against Tom and Brian winning 17-16. 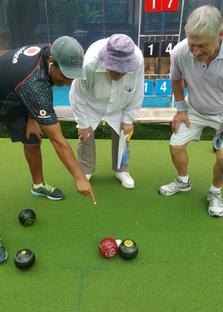 We welcomed Alan from Melbourne here on holiday with his daughter. She found out we had bowls in Chiang Mai and Alan decided to definitely join his daughter. Also flying visit from Gerry Cassidy.

In the Pairs, Eric and Richard beat Ted and Gerry 10-5. Richard M playing some good bowls after his injury lay up. 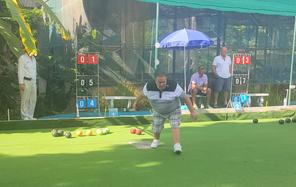 Twelve bowlers today including Don's Aussie mate Peter Jones. A chance to play 3 pairs matches and once again we were dodging the rain.

A good turn out with 16 bowlers playing a variety of formats under humid  cloudy conditions.

In the first triples Bob, Brian and Garry narrowly beat Ted, Arun and Ken by 13 to 66. Good to see Bob back after a trip back home to Aussie.

In the other triples Sam, Leon and Paul H. were too strong for Joe, Howard and Eric winning by 20 to 15.

Thai ladies pair of Rung and Mumu played Ric and Malcolm and were ahead by 7 with 2 ends to play. Then the gents managed 10 points in the last 2 ends to win 18-15.

After the bowls the draw was held for the new Singles League. - see Competitions page for details.

A good turnout of 14 bowlers today and Roon continues her fine form playing along side Brian and Joe in the triples. They beat Sam, Howard and Richard B by 20 to 14.

In the pairs Paul H. and Eric gave the Aussies Ric and Gary a right thrashing winning 23 to 10. This included 1 perfect end winning all 8 available points. The Aussies did fight back in the ANZAC spirit and reckon they will beat them next time.

In the other pairs Ted and Ken caused a bit of an upset beating Tom and Paul C. 20 to 14. 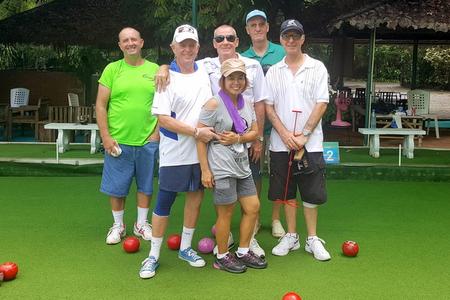 A good turn out of bowlers this morning with some new faces and a few old hands returning. Welcome to David and grand father Ron from Canada. David is a fine bowler and hopefully he will continue to play with us  in the future.

Welcome back to Garry and Francis from Tweed Heads back here for 1 month.

Today we played random pairs (with 1 triple).  After 2 rounds of 10 ends we had 3 teams with 2 wins - Eric/Leon, Roon/Janet and Joe/Garry/Garry. Eric and Leon took away the big prize with a 33 point margin.

A good turnout of 18 bowlers on a hot humid morning. Three triples were played.

Malcolm, Ted and Richard B. beat Richard M, Brian and Garry by 26 to 22. A good fight back by Richard M's team who were down by 10 at  about the half way stage.

Howard, Arun and Roon beat Ric, Tom and Don by 18 to 13. Some very god bowling by Arun.

PLEASE NOTE - next Thursday the 100 up singles semis will be played on 2 rinks leaving 2 rinks for regular bowlers.

Good to see Maureen and Mumu back bowling today.

In the 1st pairs, Don and Tom were held to a draw  10-10 by Maureen and Leon. Maureen bowling some beautiful bowls and welcome back.

In the 2nd pairs Gary and Ted hammered Brian and Ric 15-4.

The 1st triples resulted in a win to Mumu, Malcolm and Joe by 17-16 over Eric, Sam and Howard. The winners managed 4 points on the last end to edge past and leave Sam scratching his head and wondering where his win went to.

A final triples between Gary, Ted and Tom and Brial, Ric and Leon resulted in an 11 to 6 win to Gary's team.