A reasonable turn out of eleven people turned out for the Tuesday role up with new players from New Zealand Allan and Lynda Vernal getting a warm welcome. This will be a great help to Don to have other people speaking the same language.
Aussies Garry Walker & Howard Dixon  gave the best performance winning 3 out of their 4 matches.
Richard Massey & Les Harvey interchanged to play with Murray Reid.
Lynda Vernal, partnered the experianced Sam Torr with Ken Stott & Andy Bridge teaming up.
All of these gaining 2 wins each.
Bottom of the pile this week was our current Singles Champion Paul Hassall pairing up with newbie Allan Vernal.
Sadly Janet Stott has to withdraw while practicing with a strained muscle.
Everyone enjoyed themselves & we look forward to next weeks role up.

After the successful opening of the new Tong Kai Lawn Bowling Green on Sunday there was an excellent turnout to play the first match on the new Supergreen II. In fact it was the first time the Chiang Mai Lawn Bowls Club had played since June when the rehabilitation of the new green commenced. We played 4 threesomes in a round robin with 6 ends. Les Harvey did not play but offered valuable help to a new bowler, Sue from China.

Good to see Richard back playing and he seems to be recovering well from his broken hip. He played 2 of the 4 matches with Don covering. Andy drew to play with the ladies and played consistently without winning. Sukanya, playing for the first time is as future star.

The winner with 2 wins and a massive 28 points was Paul, Kevin and Richard. Great to have Albert Liddle and Kevin Kemp playing their first bowls and both seemed to enjoy it. Hopefully they, along with Sukanya and Andy Bridge will all become regulars

A glorious day for bowls and the 16 players for the singles competition all arrived on time and play commenced promptly at 9.30 am. In fact, many arrived at 7.30 to hone in their draws and drives and enjoy Nim’s coffee and muffins. The day started with some cloud cover but ended up really hot and the finalists paid the price for their good play with some sunburn. All bowlers were pleased to welcome Janet and Ken Stocks who have been following our humble beginnings via the website and arrived from Blighty on Tuesday afternoon and were up and at it for the tournament today.  A huge welcome to Janet and Ken and we should be warned that Janet played fox today and is likely to whip out backsides in the near future. Ken, ever the gentleman apologized for beating the hell out of Richard Massey in the round robin. Welcome guys; it’s not quite the playing fields of England, but -------.
And so to the match. The round robin went pretty much to the seeded players, but resulted in some interesting match-ups in the knock-out stages. Sam Torr beat his wife Rung, hardly fostering domestic bliss. Lyall Wilson gave Paul Hassell a tough time losing 4-3. The final was a closely fought battle between Malcolm Tetley and Paul Hassell and although Paul prevailed, there were many ends were the lead change with very bowl, much to the enjoyment of the crowd.
Thanks to the many guests who came to support and enjoy the bowls. Thanks to Nim for the fantastic buffet, Lam for managing the bar and Meg for preparing the green. Apologies to Mr H – unforgivable to run out of Singha beer 2 weeks in a row.

It was great to have 2 new bowlers today. This was the result of the publicity given at the Chiang Mai Expats meeting on Saturday when Don and Howard manned a table in the foyer of the meeting room and there was considerable interest shown.  Welcome Lyall Wilson and Tom Johnson. Alsoit was  good to have Oar Cassidy back playing, after a long absence. The day started overcast and cool but ended very hot and the fogging system was most welcome. Sam had another good day and partnered Murray to 4 wins and only 1 loss. Ric and Andy pipped H and Howard by half a point for second. Some big scores today with H and Howard and Tom and Gary recording 14-1 wins.

Thursday twilight bowls are back in full swing so come and enjoy playing in the cool evenings. The singles competition on 29th October is now full but if there are still people wanting to play contact Paul and get on the reserves list. 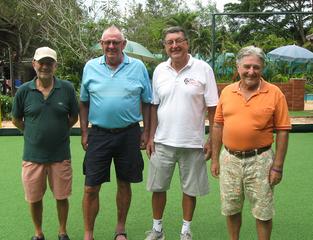 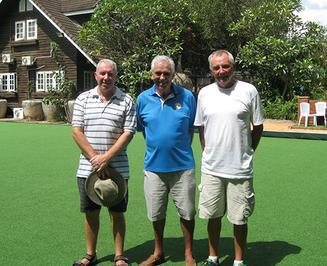 Good to have Keith Taylor back bowling today and Haydn Patterson joining us for the first time. Not his first game of bowls though as he cleaned up.  Paul Hassall had a chance to show off his new bowls imported from England and rushed to Chiang Mai by DHL. They seemed to work as Paul along with Kevin Kemp and H shared top place with 2 wins alongside Sam Torr, Paul Cowin and Howard Dixon. 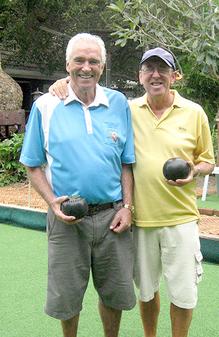 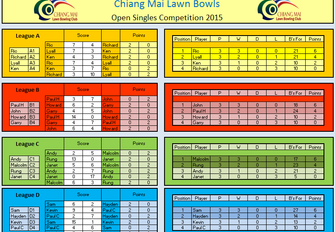 Today was a record breaking day with a turnout of 20 bowlers.  Ric Cameron’s team drew with Paul Hassall’s team with 3 wins apiece but won overall with 30 points to 22. The fours format resulted in many very close ends with the lead changing with every bowl. Although not in the winning circle some of the best finishes came from Haydn, Lynda and Sam.

Although the day was a little overcast the rain, fortunately, stayed away but then developed into a major downpour just as people were finishing lunch at Big Tree Bistro.

There has been a great response to the tournament on 22 November with 6 of the 8 teams now full.

Another good turnout with 18 bowlers arriving on time. At Paul Hassall’s suggestion today we played a threesomes match play format rather than the usual round robin. This was appreciated by all and being able to play 18 ends on the same rink saw some really good improvements in bowling as the match went on. Tom Johnson, Linda Stocks, Les Harvey and Hayden Patterson were the stand out bowlers of the day.

In the Scroungers Lyall Wilson took the 500 Baht kitty from Malcolm and Tom. 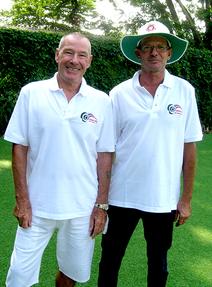 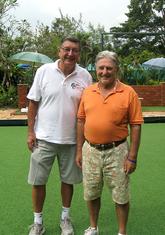 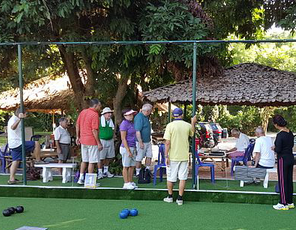 A total of 14 bowlers today and that was a good turnout considering the big tournament on Sunday. Great to have Norm Gazeley back bowling. He only got off the plane last night so he certainly had his priorities right. Norn’s friend Peter also came for a look see, and we hope he will become a regular. Today we had 2 pairs and one triples match each of 18 ends. In the triples Ken, Les and Malcolm beat Ric, Janet and Norm by a massive 25-8. Les was in particularly fine form. Andy and Alan and Tom and Hayden won the pairs with large margins. Andy and Hayden were in particularly good form.

Another beautiful day although it did get hot after 11 am. The consensus was that we need to reduce the number of ends played. Last week’s marathon 30 ends was just too much and we need to consider out health. Today we played 12 ends of triples and then 6 ends of Scroungers for a total of 18 ends and this was generally agreed to be about enough.

During the week we had visitors from the Retreat Bowling Club in Pattaya. Bruce and Nigel gave both our green and Big Tree Bistro the thumbs up. We have since been in contact with Colin Brocklehurst the owner of Retreat and he would be very keen to work together in the future.

Today’s winners were Andy Bridge, Richard Massey and Lyall Wilson with 2 wins, and runners up Malcolm Tetley, Hayden Patterson and Kevin Kemp with 1 win. In the Scroungers, Gary Walker got away to a big lead in the opening ends (9) but was overtaken by Malcolm in the last 2 ends (13).

A cool overcast morning made a pleasant change from the recent heat. Ten bowlers today and a 5 team pairs round robin was played. Total contrast from the winners to the losers; Don and Lyall took the wooden spoon with 4 straight losses, although most games were close. The winners were Richard and Sam with 4 straight wins. I wonder who did the draw? The remaining pairs shared 2 wins and 2 loses. 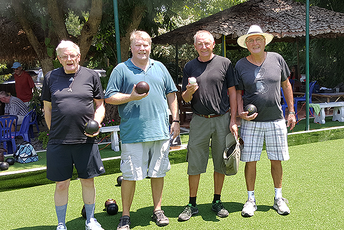 Another good turnout today with 14 bowlers enjoying bowls on the new Tong Kai green. It did get a little hot and 5 rounds (30 games) was perhaps overdoing it.  The format today was a pairs round robin with some swopping of partners to get everyone a game. Overall winner with 3 wins and a draw was the pair of Sam Torr and Sukanya Liddle. Sukanya in only her second match is proving to be an outstanding bowler – well done Sukanya. A couple of high scoring games with Don and Paul winning 16-2  and Richard and Kevin with 11-2 win.

The pair of Hyden and Paul provided a record score of 41 points today but no clean sweep as they drew their game with Sam and Kevin. Hayden was on fire, often outplaying his partner. Sam and Kevin played some steady bowls for second. The surprise result today came from Richard and Andy who are usually at the top. Perhaps Richard’s new poofter white bowls were just too much.