16 bowlers in attendance today and some big scores. In the triples Alan, Tom and Leon beat Richard B, Roon and David by 37 to 8 with Tom playing some outstanding bowls when it mattered. In the pairs Shane and Ric beat Ron and Brian 27-17 and Ken and Malcolm beat Malcolm and Marc 24-19. 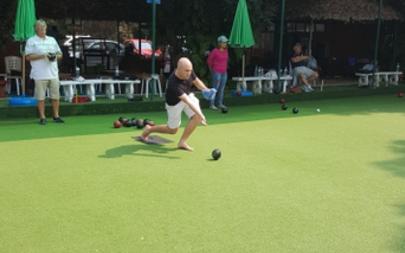 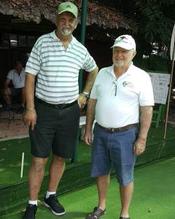 In today's club roll up,

​A lot of fun today with Nim's bacon and egg pies a sell out.

At Thursday's twilight roll up,

Alan and Peter narrowly beat Roon and Mai 18 to 12.

Sam and Arun surprised Tom and Chris winning by 31 to 9. The lesson from Alan has obviously helped Arun - well done. 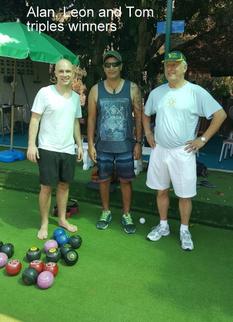 ​12 bowlers Tuesday morning including return of Gary and Salisa from cold Canada. Welcome too to Randy a long time mate of Ted. Today's game was Jokers organised by Richard Birs. Winners with 3 wins were the 2 Gary's

​14 bowlers  on Tuesday morning including Alan McMaster a visitor from Aussie. Alan is a very good bowler and has played competition bowls in Australia. He has had a 10 year break from the game and was pleasantly surprised to find a bowling green in Chiang Mai.

In the pairs Alan and Richard B beat Ric and Ron 29 to 20 and Malcolm and Garry narrowly beat Eric and Gary (Canada) by 23 to 22.

In the triples Roon, Salisa and Brian beat Tom, Chris and David by 22 to 16

The ANZACs Don, Garry and Ric were well beaten by  Roon, Richard and Alan  by 2 sets to nil.

Eric and Richard M beat Tom and Andy in a very tight game and in the other pairs Malcolm and Leon had a fine victory over Marc and John.

Tom and John caused a bit of an upset today  narrowly beating Roon and Richard B by 20 to 18. Don, Garry and Ric too good for Chris, Andre and Malcolm winning in 2 sets to nil. The 2nd set was a lot closer at 11-10.