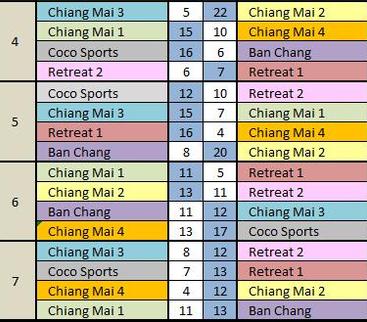 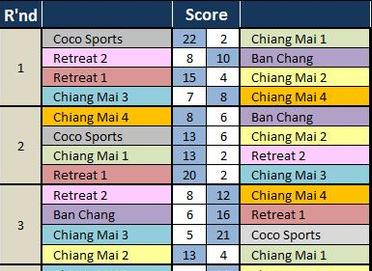 After 2 days of fierce but friendly competition, the first Chiang Mai Winter Challenge triples tournament has successfully concluded. All visiting teams enjoyed a practice day on Friday and on Saturday everyone arrived on time. Chiang Mai teams were expecting tough competition but maybe not Darren Chatwin (who has recently won 2 major Thai tournaments), Chris Bailey (a past participant in the Australian Open Bowls comp.), and the Thai SEA Games team ! (Coco Sports).  You can imagine the thoughts going through the minds of Chiang Mai 1 (Colin Stratford, Marc Van Lierbergen, Malcolm Tetley) as they faced the Thais in the opening game and can commiserate with their 22 to 2 pounding.

Four rounds were played on Day 1 and the big message was that the Chiang Mai teams were competitive and not the underdogs, winning 5 of the 11 matches against the visiting teams. Chiang Mai 4 (Eric Shipley, Sam Torr, Roon Birs) were the best of the Chiang Mai teams with 3 wins  after some exceptionally good bowling by Roon. They were very lucky to beat Chiang Mai 3 (Richard Birs, Richard Massey and Gerry Cassidy) by 7 to 6 in the first round. Chiang Mai 2 and 3 each had 2 wins from 4 matches, a great result. At the end of Day 1 it was obvious that there were 2 exceptional teams - Retreat 1 and Coco Sports (the Thais) and they ended the day tied with 4 wins each.

Day 2 commenced with a nice wintery  morning and some surprises in store. In Round 5, Chiang Mai 3 gave Chiang Mai 1 a 15 to 7 beating and then in round 6, Malcolm, Colin and Marc  went from zero to hero beating the hot favorites Retreat 1 by 11 to 5. The Champions were simply outsmarted on Rink 1.  Chiang Mai 2 (Paul, Martin and Leon) had a much better day winning all 3 matches, good enough for 3rd place overall. The last game of round 7 was really like the final with Coco Sports unbeaten with 6 wins and Retreat 2 with 5 wins. Retreat had to win by 7 points to take the money. They looked like they had it in the bag until the last bowl of the tournament when Num showed why he is Thai champion and took the last end.

It is a proud day  for the Chiang Mai Lawn Bowling club. We know we are now competitive and that we can host a major tournament. With assistance from Paul Hassall and Andy Bridge, one man can stand tall as the outstanding organiser of this major tournament. Six months ago we had a match committee of 6 and then they fell by the wayside and there was only one man left - Eric Shipley. Well done Eric. 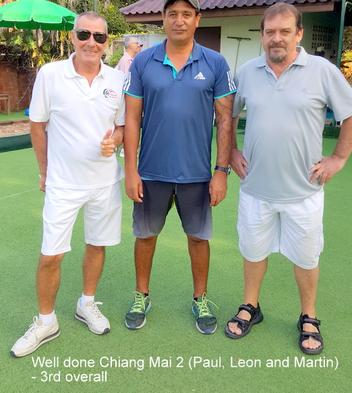 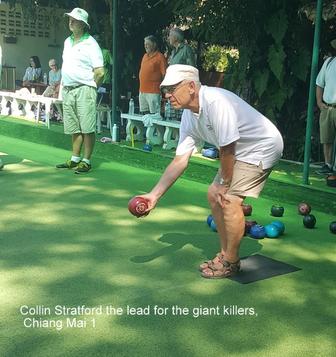 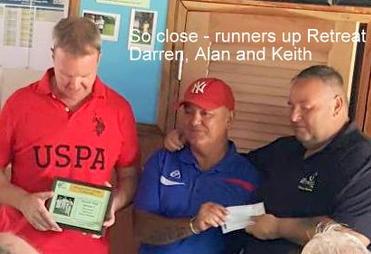 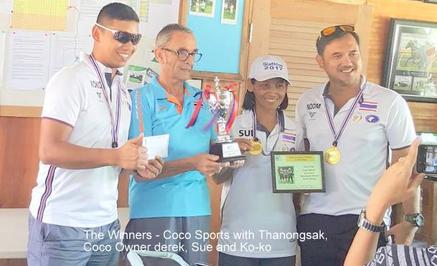